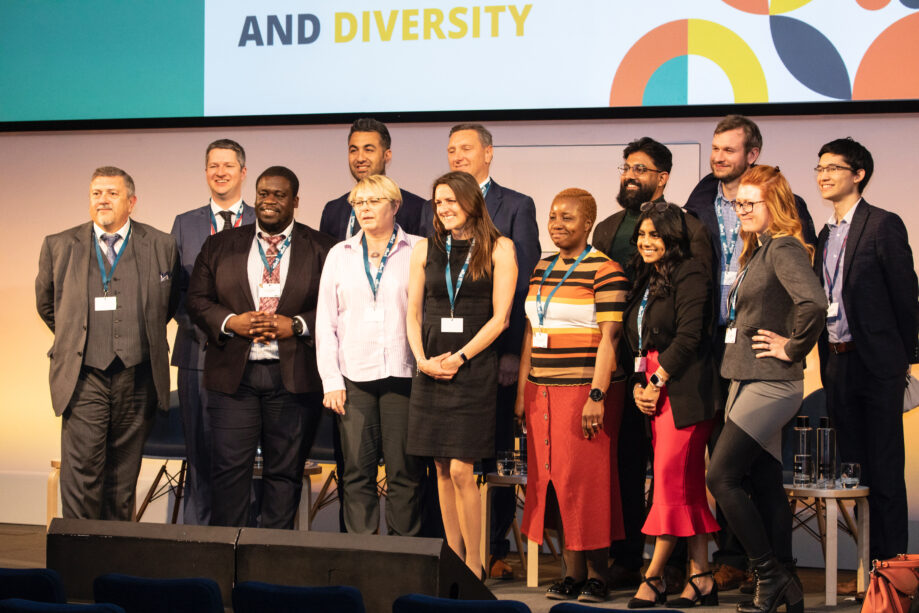 Leonardo became the first aerospace defence company in the UK to enter into a partnership with AFBE-UK. Over the past 18 months, this collaboration has developed through several dynamic initiatives.

In this Q&A, Folayo Osekita, Head of Airborne Communications at Leonardo and the Chair of their first Ethnicity Network, describes Leonardo’s journey and outlines AFBE-UK’s valued contribution.

Folayo, can you share how you first became aware of AFBE UK and how our collaboration with the organisation has grown over the past two years?

I became aware of the Association for Black and Minority Ethnic Engineers (AFBE-UK) in 2012 at an event I attended where I met the national chair, Nike Folayan MBE. At the time, I was Chair of a new employee network at a previous organisation. It wasn’t very fashionable to talk about race back then and, therefore, it was very difficult to make the case to secure corporate funding to sponsor AFBE-UK. I maintained informal contact with Nike and was able to secure support from network members for some STEM events.

Incidentally, Leonardo’s contact with AFBE-UK came through an ex-employee and the chair of the Scottish branch of AFBE-UK, Dr Ollie Folayan. I joined Leonardo in September 2020 and when our then Head of I&D Nerys Thomas approached me for my thoughts on Leonardo partnering with AFBE-UK, I already had first-hand experience of their impressive impact.

I’m proud to be working for the first company in our industry to create a partnership with AFBE-UK. Following several meetings with the organisation, we identified a number of actions to support Leonardo’s I&D strategy.

These talks were thought provoking and conveyed some uncomfortable truths, covering a range of challenging topics including the history of racism, how racism has evolved, and how it currently manifests itself covertly through micro-aggressions and opportunity denial. The fact that this type of conversation could happen at Leonardo is a huge step forward in creating a climate for open conversations on race.

How has AFBE-UK informed your activities in raising awareness at Leonardo and establishing their first Ethnicity Network?

Since the partnership formed, AFBE-UK has supported us in launching a new employee network, the Ethnicity Inclusion Network. The Network Leaders Forum is a cross-industry forum of Ethnicity Network Chairs and representatives of AFBE-UK sponsor companies facilitated by AFBE-UK and it has provided us with a platform to share best practice.

This includes encouraging courageous conversations, where people feel comfortable about starting and having discussions about race. This has inspired us to launch an internal initiative to empower our employees to share insights from different perspectives, as part of our Valuing Ethnicity Webinar / Podcast Series.

Can you share details of some of the projects and events that have been held in partnership with AFBE-UK?

In 2022, Leonardo embarked on its first pilot mentoring scheme in collaboration with AFBE-UK. Nine Leonardo employees drawn from diverse areas of the business forged excellent mentoring relationships with AFBE-UK members. The feedback received so far has confirmed the value of the activity in expanding awareness of engineering careers and helping individuals to identify and build on their potential.

Having enjoyed an active partnership with AFBE-UK for over a year, Leonardo became a gold sponsor of AFBELive!22, a bi-annual conference organised by AFBE-UK. The event took place on 22nd April 2022 at the IET, Savoy Place in London and brought together university students, professional engineers, academics and others within our Industry who are supporters of the work that AFBE-UK are doing.

The conference provided attendees with a display of AFBE-UK’s work in the UK over the years and presented a unique opportunity for attendees to expand their network. They could learn about the contribution of people of ethnic minority origin through innovation within our industry, community and the wider world. We were able to discuss the opportunities we are able to offer, whether that be work placements, internships, or company visits for young people. Our STEM Lead within the Ethnicity Inclusion Network, Arvind Mahendran, participated in a mentoring discussion where he shared his passion for mentoring.

Post-conference there was such a buzz, so much so that one of our engineering managers was inspired to write an article about the event. This was published as part of the line of business monthly briefing under the engineering functional update. This really excited me as for the first time I saw that this wasn’t being perceived purely as an I&D activity but as a wider theme involving everyone. We recognise that we have more work to do to attract, develop and retain people from ethnic minority backgrounds – AFBE-UK is supporting us with this intent and the conference offered us insights into what we could do in the future.

Leonardo also supported AFBE-UK Scotland’s Diversity and Inclusion Awards, which were held in 2021, by sponsoring the Mentor of the Year Award. This honour went to Helen West, of Thames Water.

Leonardo also provided speakers for AFBE-UK’s NextGen programme, which provided a platform to create a positive perception of engineering among young people by presenting it in an exciting, vibrant and informative way. In so doing, Leonardo also had the chance to be visible to a population of young people who might not otherwise be familiar with us.

How has the partnership with AFBE-UK influenced Leonardo’s approach to Early Careers Recruitment?

We have supported STEM programmes hosted by AFBE-UK to ensure jobs in our industry are widely visible to the next generation, so pupils from a variety of ethnic backgrounds have equal access and visibility of opportunities.

Leonardo has co-hosted a ‘Transition Programme’ with AFBE-UK, where some of our managers offered career tips, mock interviews and applications advice to attendees, some of whom have now been accepted onto our Early Careers Programme in 2022.

We aim to continue this activity, as we have so many opportunities across several engineering disciplines that we look forward to sharing when we open for applications later this year. Through such activities, we hope to move the ethnicity balance within our organisation in the right direction.

AFBE allows us to reach a wider audience for our early careers recruitment, as we share details of our graduate and apprenticeship programmes with them, which they in turn share with their network.

Finally, can you share any exciting plans that are in the pipeline?

We will soon be supporting AFBE-UK with their excellent calendar of events with schools – which have previously reached 3,500 pupils. This is aimed at inspiring the next generation of engineers.